JASON: The swamp has taken sides. One of the things we were gonna do -- had I won the U.S. Senate race, had President Trump had his second term -- is go after civil service reform. You have permanent bureaucracies. Politicians come and go. Schedule C appointees come and go. Political appointments come and go. But the bureaucracy stays there. We better do something about that before we have a one-party rule in this country.

And this one-party rule now is pulling out all the stops for an infrastructure bill, and five Republicans are helping the Democrats get a trillion-dollar infrastructure bill passed when the country's bankrupt with a $30 trillion debt. What on earth are they thinking about? The Democrats are use reconciliation to try to get this passed, but they've got a little problem with the Byrd Rule.

The Senate parliamentarian has already said, "This is for a budget resolution, a one-time deal." She's right. I served on the Budget Committee. We passed three budget resolutions. They were all-encompassing, macro budgets. You can't just blow out spending and call it reconciliation. Here's what Rush had to say about this infrastructure stuff.

RUSH: The Democrats are measuring the drapes in the Oval Office. They're already plotting how they'll spend your money. Politico reports that Democrats are "eyeing aggressive budget and spending plans" if they sweep in November. They plan to deploy every tool at their disposal. The Democrats are sick and tired of strict budget caps, the threat of automatic spending cuts. So if they pull off a trifecta -- winning the White House, the Senate, and the House -- all bets are off.

They'll use "budget reconciliation" to get around the Senate filibuster so they can spend big on "infrastructure," clean energy (the Green New Deal), government-paid child care, and other leftist big-ticket items. Senior Democrats are not hiding it. They plan to disperse trillions of dollars on their budget fantasies. Democrat Congressman John Yarmuth -- who would head the House Budget Committee -- said, "The possibilities are endless!" 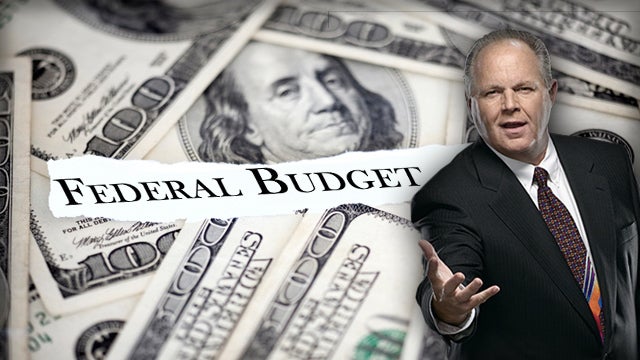 So, we'll get endless spending on the Democrat agenda, plus Joe Biden's promise to raise taxes on businesses and get rid of the Trump tax cuts. Add it all up, and here's what we've got: Businesses fleeing the country again. Massive recessions again. Low economic growth again, millions of jobs down the drain again. Prosperity out the window. The American Dream: destroyed. That is what Democrats have to offer, it's what they want to offer. It's what they do best. Do not doubt me, folks.

JASON: Do not doubt El Rushbo. He's right, of course, and this infrastructure bill should be going nowhere. The thought that five Republicans (the usual suspects) are trying to work to get this done is a gift to Biden. But the real danger is that if they get infrastructure out of the way, what the Biden administration really plans to do is to wrap everything else up -- $4 trillion, $5 trillion, $6 trillion -- into a reconciliation bill.

It's gonna be a total abuse of the 1974 budget law that says budget reconciliation passes a budget. It's got to be germane. It's usually used once, not for endless revisions, and that's what the Senate parliamentarian has already said. So naturally what did Ilhan Omar say? "Fire her, and we'll just cram this down the throats of the American people because we want to end up just like Venezuela: Bankrupt."