KEN: Charles Barkley, star of Inside the NBA, the face of the show for the past 21 years announced on Washington sports radio, The Fan, that he'll be leaving the show when he turns 60 -- I believe he's 59 now. So he's leaving the show in a year, called his bosses cowards for bowing down to woke culture. He said (impression) "So terrible, got so out hand. This is terrible. Can't have no fun." Something like that. Said, "I could not imagine having to watch myself. You can't even have fun without these jackasses trying to get you to cancel. And everything else." (impression) "It's terrible. It's terrible."

I'm gonna miss him because he's truthful, and sometimes he says things I agree with and sometimes he doesn't, but what I love, he embraces his free speech. And he has a wicked sense of humor. And he's a great athlete, and he's got common sense.es such a great example of America. And that's what the Democrats are trying to destroy.

I mean, Barkley knows that it's never gonna end as long as people in power in a regime like we have now keep shutting down "certain people," because sooner or later you or I or people that we disagree with will fall into that category of "certain people." Well, you can let him talk but not her, and not him, but that T-shirt's okay to wear, but don't wear that T-shirt on the train. We're already there. It's too late. We've lost free speech. We've said this months ago. We lost it. We started losing so many of our basic rights when the lockdown farce started. And it just continues. And Barkley isn't the only one.

There's a few other changes coming as well, with people of his profile. 'Cause people are tired of the wokeness. They're tired of -- Barkley wants to say a joke or say something funny or speak off the cuff. He's not being vulgar. He's not being threatening. He's not being violent. He's just saying something that maybe somebody has a problem with, but I've never seen so many people that have such a misunderstanding of free speech. Free speech does not guarantee you're not gonna be offended or you're not gonna get angry or you're not gonna break down in tears. That's not what free speech is for. That's why I think Putin had to look at America over the last year and a half and say to the Democrat Party, "Thanks for doing the heavy lifting for us. We look at we were gonna have to roll in here with tanks and team up with China, but you guys are shooting your own feet off."

Let's go back to 2014 when Rush talked about Charles Barkley. Here he is.

RUSH: Chuck Barkley's in trouble. Well, "trouble." Yeah, he said something. He basically insulted the women of San Antonio, called 'em fat. "Charles Barkley went to town like usual when breaking down the overweight (in his opinion) women of San Antonio during 'Inside the NBA' on TNT Tuesday.

So they asked Chuck Barkley's opinion of San Antonio women. "That question just opened the flood gates for jokes that Chuck has used over the years, and he brought them all back up. And now he's facing the music," it says here. "The National Association to Advance Fat Acceptance -" You ever heard of that group? (interruption) You have? Aw, come on, I've got two people claiming they've heard of the group. 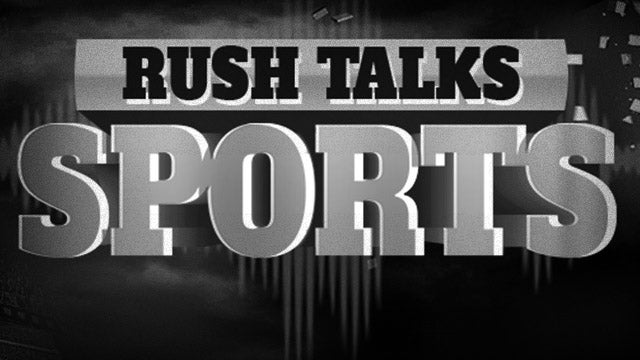 "The National Association to Advance Fat Acceptance wants Chuck to apologize for his comments, which included saying there are some 'big'ol women' in San Antonio and that it's a 'gold mine for Weight Watchers,' for whom he is a spokesperson. 'Making slurs about body size is just as offensive as making comments about body color,' spokesperson Peggy Howell told TMZ Sports. 'One would think being a black man, he'd be more sensitive to having his physical body criticized. It's totally out of line. He should absolutely apologize.'"

Totally out of line! Chuck should absolutely apologize. "In addition to the Fat Acceptance group, the President of the Obesity Action Coalition issued a statement about being disappointed with Barkley. 'As a former NBA player and sports entertainment figure, Mr. Barkley should encourage equality and respect among society and not look to shame or segment one population because of their size. Obesity is a serious medical condition and not a joking matter.'"

Well, you know, Chuck's no Mr. Svelte himself, if anybody has noticed. But the headline says "obesity and fat groups," as though there's a difference. I just don't know that Chuck is gonna have to apologize. People like Chuck don't have to apologize. People like Chuck are celebrated when they do stuff like this. Courageous, bold, you tell 'em, Chuck. Oh, he was just making a joke. Come on, folks, everybody knows Chuck, he didn't really mean anything by it. We're back to the old intentions thing.

Here's Barkley on TNT Tuesday night, Inside the NBA. Chuck Barkley and analyst Kenny Smith are talking about the women in San Antonio. I want to tell you again: For Chuck to even be asked the question, one of two things to happen. Either Chuck was running around cracking jokes about the women of San Antonio before the show and somebody said, "You know what, Chuck? We should ask you about that on the air."

BARKLEY: Big ol' women down there.

SMITH: Why would you say that?

BARKLEY: That's a gold mine for Weight Watchers, and Victoria's definitely a secret!

HOSTS: (yukking it up)

BARKLEY: They can't wear no Victoria's Secret down there.

RUSH: Yeah, so it's Chuck doing his stand-up act. "Victoria's a secret down there. They definitely can't wear no Victoria's Secret down there. They're big! They're big! Victoria's definitely a secret." I can't believe anybody's seriously outraged. (Oh, yeah, I can. Yeah, I take it back. People are living out there to be offended.) But nothing's gonna happen to Chuck. Nothing at all, other than Chuck's gonna end up more in demand. Chuck is gonna be thought to be even funnier and clever, and even more shows are gonna want Chuck on to find out what he thinks about whatever.