CLAY: I gotta tell you, Joe Biden, a lot of misinformation that he is spreading, in particular about covid. That is why we’re gonna play you a cut here that is 100% inaccurate. It’s also a lie, and either Joe Biden doesn’t know what is going on in his own White House (which is certainly possible) or he’s choosing to intentionally lie to the American public. Let’s play Joe Biden talking about vaccinations and lying and saying, “If you are vaccinated, you won’t get covid.”

BIDEN: The — the various shots that people are getting now cover that. They’re… Th-th-they’re… You’re okay. You’re not gonna get covid if you have these vaccinations.

BUCK: What he’s gonna do is what he did with the (impression), “Facebook is killing people,” where he’s gonna say something, and then when everyone says, “Well, that’s not true,” he goes, “Well, of course, I meant something else. They’ll say, “He’s exaggerating,” or, “He’s trying to tell people, ‘You won’t go to the hospital or die,'” which is also not a factual or entirely true statement, right? There are people who get vaccinated who do go to the hospital and actually the numbers are higher recently than people anticipated from the Delta variant, but Biden doesn’t have to be accurate, Clay, ’cause he’s morally right. That’s how they see this.

CLAY: What is interesting, though, is the White House itself, the Biden White House has… They haven’t officially announced how many people, but they have a lot of right now in the Biden White House who have been double vaccinated and have contracted covid. And we’ve seen this happen with lots of different people across the media sphere and certainly the athletic sphere. Look, the data reflects that you have more protection when you are vaccinated. I’m not trying to argue to contrary there.

But telling people, “If you’re vaccinated you’re not going to get covid,” is 100% inaccurate. And if you’re lecturing everybody about Facebook protecting inaccuracies and Twitter and all the responsibilities of Big Tech, don’t you as the president of the United States have an obligation to get basic facts right and say, “Look, all Joe Biden had to say was, ‘You are more protected with the vaccine from covid than you are without it.'” That’s an answer that is true but saying to people out there you won’t get covid if you get vaccinated is a lie. It can still happen — and in fact, it’s starting to happen with the Delta variant more and more.

BUCK: They think that it’s justifiable to exaggerate or to oversell things to get people to do it when it comes to covid response and the vaccination campaign, which also brings me to why I think there’s some hesitancy this time around on also the mask situation, because you gotta a couple things going on here.

We were promised, Clay — very clearly and explicitly — you get the vaccine, you’re protected 95% with some of them, 92 or 93% with others. We were promised, “You’re done,” and there may be boosters in the future, and we all know that and they can’t tell that you won’t have to get boosters.

BUCK: So that’s a promise that they can’t really make that they did and also the implicit promise was, “Get vaccinated and you don’t have to wear a mask anymore,” and now the guidance from Fauci today is (impression), “Even if you’re vaccinated, maybe a mask, maybe some goggles.”

CLAY: (laughing) Maybe a triple mask. I saw, Buck… I’m sure you’ve seen it. I saw on my flight to L.A. yesterday. There were people there that were like in hazmat suits basically.

BUCK: Again? I saw that at the beginning. Back in the hazmats?

CLAY: I couldn’t believe it. They were triple masking. They looked like beekeepers. They looked like they were at some point halfway through the flight going to have to go pull honey out of a beehive. I’m looking around, asking —

BUCK: Can I tell you something?

CLAY: — what are you actually contemplating here?

BUCK: Just real quick. The people in the hazmat suits, as absurd as that is, that will probably protect you pretty well from any virus. 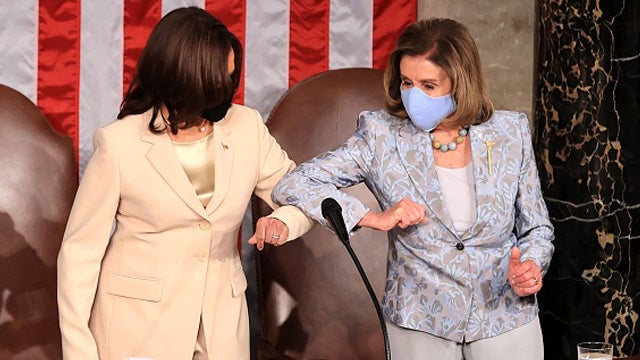 BUCK: Whereas the Hillary, Biden, Kamala kerchief that people are wearing that I see on the streets of New York or L.A. or wherever? That will not protect from you aerosolized virus.

CLAY: Do you have to take off the hazmat suit when you go through security? Is that like a coat? I don’t even know what the rules are.

This story originally appeared in Clay Travis and Buck Sexton

About The Clay Travis and Buck Sexton Show